NAVIGATING THE CHANGES OF LIFE

THE ROAD TO MENOPAUSE IS A NATURAL TRANSITION BUT STILL SHROUDED IN MYTH AND MYSTERY, CAUSING DISTRESS AND CONFUSION. ALISON DADDO AND TORY ARCHBOLD HAVE A FRANK CONVERSATION THEY’D LIKE ALL WOMEN TO JOIN.

For two decades, PR and marketing guru Tory Archbold has nurtured some of the world’s top-performing retail brands and celebrities. Now she’s asking women entrepreneurs, CEOs and influencers to share their secrets to success, their highs and lows and game changing moments, with her Powerful Steps online platform and Powerful Stories podcasts on the Nova radio network.

Recently Tory conducted a podcast with Alison Daddo (nee Brahe) who was a much sought-after covergirl and international supermodel in the 1980s and 90s, and married actor Cameron Daddo in 1991, becoming Australia’s fairytale couple and producing three gorgeous children – daughter Lotus (1996), son River (2000) and daughter Bodhi (2006).

Tory and Ali shared stories about their respective health challenges that proved wake-up calls in their lives, with which they’re seeking to help other women. Notably about perimenopause – something most women will experience but, they believe, is too little discussed:

Tory: I don’t think there was a magazine cover when I was growing up that you didn’t appear on. You married the man of your dreams and moved to Los Angeles to pursue what everyone calls the American Dream. What was this time in your life like?

Ali: The first two years, I just hated [America]. But I adore it now. It’s where my children were born and raised and I have so many friends there.

Tory: How did you make it work with three kids and a husband in the limelight? 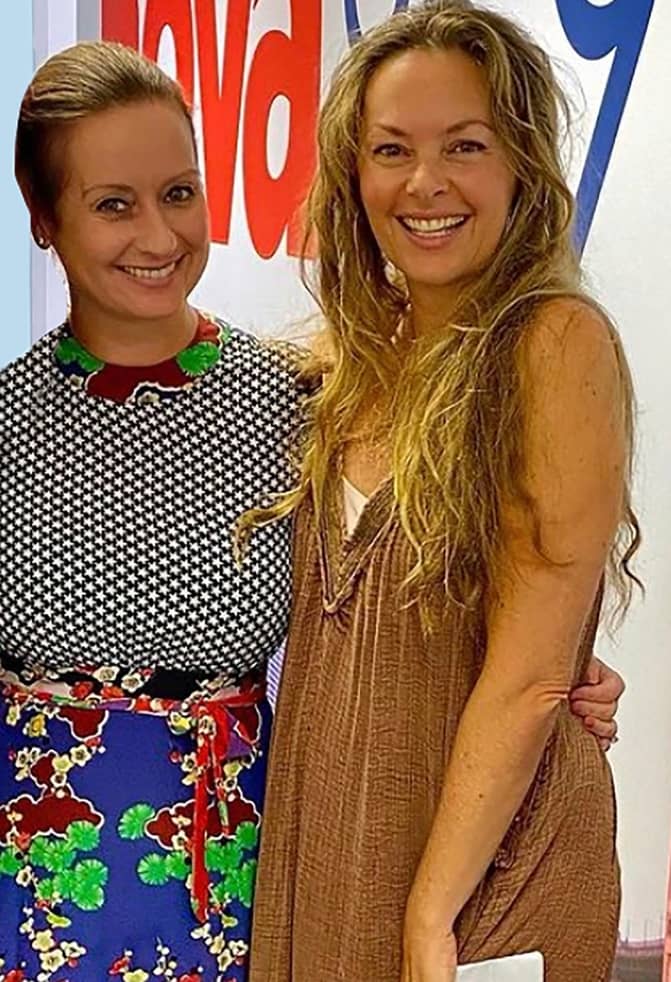 Ali: My dream since I was a little girl was to be a stay-at-home mum. Unfortunately in LA, I was doing a lot of it on my own [for instance, Cameron was away for long periods filming F/X: The Series in Canada]. It wasn’t until my children started getting older that I realised there was something else I wanted for myself. That’s when we started trying to work out how I could get back in the workforce.

Tory: What was the workforce for you?

Like a lot of women, I started having these crazy symptoms and thought, “What on earth is this?”. Then I heard the term perimenopause floating around. I’d never come across it before.

Ali: Working with children. At first I was a birth assistant, working with couples about how they wanted their birth to go.

Tory: What we’re moving on to is how the human body adjusts to trauma. I’d like to share an experience I had in 2013. I was wearing two masks in my life. One was this jet-setting businesswoman, living what a lot of people thought was a glamorous life. But behind the scenes, I was dealing with a lot of trauma. Then my appendix burst and it was literally the live or die moment. I lost eight kilos in five days and was told I had a six-month recovery. In reality, it was three to four years until my body fully recovered because I developed chronic adrenal fatigue.

Ali: Burnout is real and research I’ve read indicates it can lead to perimenopause.

Tory: I’m now in my mid-40s and going through it. When I started getting symptoms I had no idea what they were. Then I saw you at a function and we started chatting. I realised “this is the woman who needs to tell me about my future”. Now you’ve written a book about it [release date to be confirmed].

Ali: Like a lot of women, I started having these crazy symptoms and thought, “What on earth is this?”. Then I heard the term perimenopause floating around. I’d never come across it before. Menopause, yes, which to me was something where your period stopped and life went on. That was it. But there is so much more to it; to understand and prepare for.

Tory: I always thought menopause was for women in their 60s. The reason I shared my story with you, and why I pinpointed adrenal and chronic fatigue, was because we run at such a rapid pace. This adrenal, this chronic fatigue, this running on empty, what does it do to us?

Ali: When your adrenal system is taxed, it sends your hormones nuts. The symptoms can be alarming … loss of libido, lack of mental focus, things like intolerance to cold, craving salt and/or sugar, low blood pressure, mood swings and hot flushes. 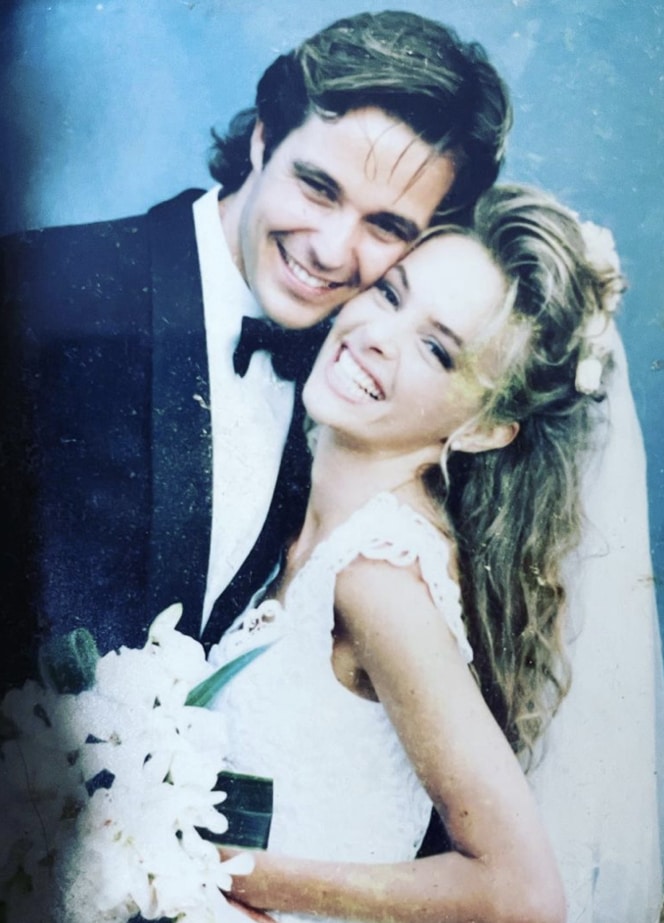 Tory: I have noticed in the last year I have put on five kilos and it won’t go anywhere although I’m sure I burn a lot of calories with my husband! I’ve been blaming it on COVID, but I can’t blame that anymore.

Ali: Again, it’s the hormones shifting. And if our adrenals are also shot, we’re too often too exhausted to exercise. The worst thing you actually can do is attempt to push yourself to exercise really hard when your adrenals are weakened. You need to build up really slowly, such as a little walk here and there.

The more the adrenals get shot, the more the hormones fluctuate. That’s where the belly fat begins, and around the bum.

Tory: Now, you’re a woman in business and you’re in a meeting and all of a sudden redness creeps up your neck or face. I’ve been on Zoom calls where I can see it happening to other women. Where does that come from?

Ali: It’s the hot flush. Again, it’s the hormones attempting to find balance. It’s like this internal combustion – you can be just sitting there doing nothing and it just whirls up from inside. I would sweat buckets and buckets and I thought there was nothing I could do. But there are a lot of amazing herbal remedies on the market – I personally go that route and see a naturopath. A lot of people find great relief through HRT prescribed by a doctor.

Tory: What would you say are the biggest challenges for women recognising the triggers that say: “Slow down”?

Ali: I think it’s taking stock of how you’re feeling physically, emotionally, spiritually and mentally. If you’re noticing that your patience is really short, you’re not sleeping well, are beginning to crave certain foods.

Tory: How long did that go on for?

Ali: Probably about two years. I was so busy doing other things that I kept on ignoring the symptoms, thinking it would just be fine, it’ll get normal again. Then it would be normal and have a period once a month. I’d go “Oh, now I’m back on track”. Slowly but surely it would go crazy again.

Tory: So tell us about the book.

Ali: I’ve called it Miserable Magical Menopause because there’s miserable and there’s magical. There are a lot of interviews and I talk about my experience from when I first discovered I was in perimenopause. Similar to you, I was in chronic adrenal fatigue. Mine really hit from when I moved our family from America to Australia and I left behind my closest friends, home and career. I was absolutely, utterly exhausted. And so of course my symptoms went sky high. I wanted to tell women to look after themselves, to have a balanced life, and then you can care for others. I didn’t do that. My life was all about caring for others and I really paid the price for it. That’s been a huge shift for me.

Tory:  Last question. Most powerful step you ever took in your life?

Ali: There’s been a few, but I think the first one that really set my entire life on a different course was going to a therapist. I spent years with this therapist and she completely changed my life in such a powerful way and that’s why I’m a huge proponent of therapy. 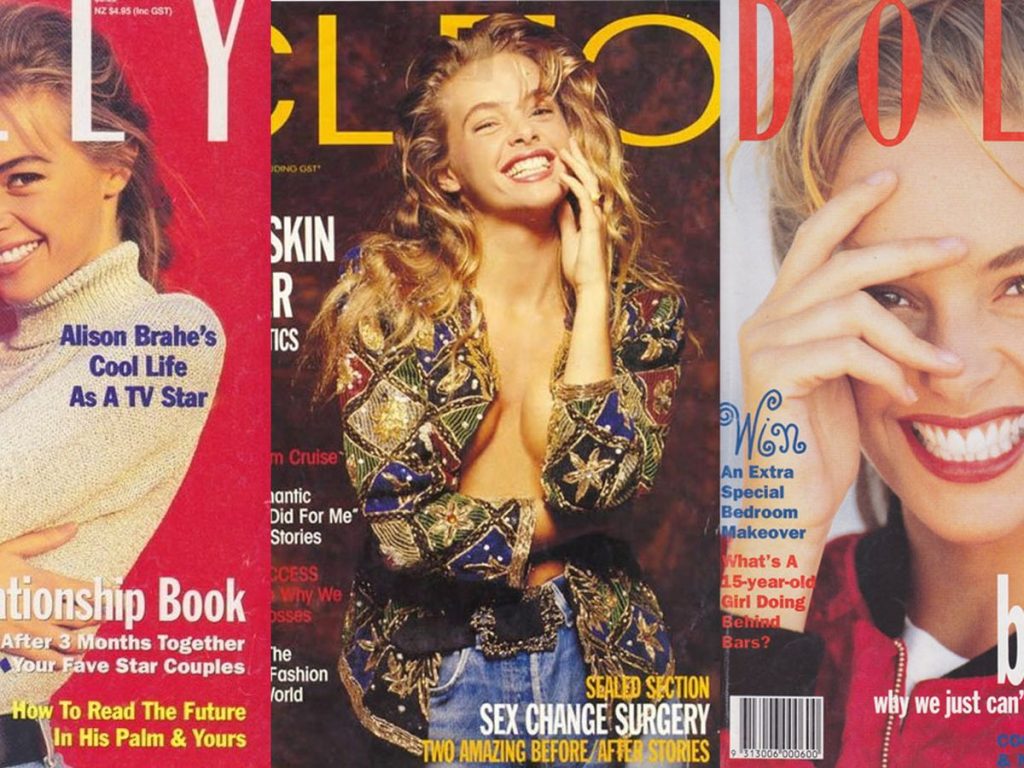 Alison Brahe burst on the Australian modelling scene as a 16-year-old in the mid-1980s, a regular covergirl on the popular women’s magazines of the day and a favourite with big-name advertisers.

TV came calling, such as the daily afternoon children’s show Guess What and she was a popular guest host of the iconic Here’s Humphrey.

After moving to Los Angeles in 1992 Cameron, Alison’s life took a new path. She initially worked in TV, on commercials and in shows, but this was not her passion. Teaching/taking care of children and, indeed, having her own children were her heart’s desire.

She began studying with the Bodyfulmind Institute, founded by LA 80s health expert Doreen Rivera (the driving force behind Jane Fonda’s Workout). There she trained and taught Bodyfulmind exercise classes and headed up the Pregnancy Program which readied couples for birth, labor support and post-partum support. While doing this she studied massage therapy and in 1999 received her degree.

In 2013, she achieved her teaching degree from UCLA in Early Childhood, and began full-time teaching at Under the Oaks, Malibu, with the pre-school class. She continued her own studies and training in Rudolph Steiner Education at Highland Hall Waldorf School.

Alison has always been active in charity work, sponsoring children of World Vision for three decades. From 2007-12 she was involved with Gulu Walkand, The Invisible Children, a charity that works with rehabilitating child soldiers in Uganda. She continues to look for and support worthwhile charitable organisations.

Though her life in front of cameras ended, she’s continued to work on her screen writing, having written and produced the US web series Polly G. Today she’s working on several feature film scripts.