DARK SIDE OF A FAIRYTALE

She was the fairytale bridesmaid, supporting her best friend as she married a European crown prince, in a ceremony watched by millions around the globe. Celebrity radio show host and ex-contestant on Celebrity Survivor Australia, Amber Petty writes about her mental health and love through a memoir “This is not a love song”.

Princess Mary’s best friend and bridesmaid seemed to have it all. Just goes to show the veneer is just that.

She was the fairytale bridesmaid, supporting her best friend as she married a European crown prince, in a ceremony watched by millions around the globe.

Amber Petty’s life from the outside looked magical indeed: she was variously an executive at Mushroom Records, had “dream” jobs in magazines, was a contestant on Celebrity Survivor Australia, and a co-host of a breakfast radio show in Adelaide.

And then of course there was That royal wedding in 2004, when Tasmanian Mary Donaldson became Crown Princess Mary of Denmark, wife of the future King, Frederik.

However, behind the scenes Amber’s life was tumultuous.

Magazine colleagues tried to use her for “Mary gossip” to write salacious stories. Her love life fell apart so dramatically that she found herself fearing for her life (more than once), and the toxic pressures of life working in commercial breakfast radio became unbearable.

The icing on the proverbial cake came via a “gotcha call” set up by her radio co-host.

At that point, Amber was forced to put herself under the microscope to find out why she kept attracting so many smiling assassins. And, perhaps – more importantly – why she’d allowed them to stay.

She began a decade of inner work and soul searching, her discoveries from which are gems peppered throughout her first book, This is not a Love Song, with the aim of helping those who have found themselves in similar situations.

“I know of so many people stuck in a mental and spiritual crisis, with trauma repeating in their lives, unable to break the cycle,” she says.

“I certainly don’t claim to have all the answers, but I’ve been able to learn some valuable lessons that I hope others might benefit from.”

Following are extracts from This is Not a Love Song.

In the early 2000s, Amber’s best friend, Mary Donaldson, left Australia to pursue her relationship with heir to the Danish throne Prince Frederik, who she’d met during the Sydney Olympics:

Things between Mary and her new Danish man progressed slowly yet steadily over the next 12 months. The long-distance courtship continued, with Frederik making trips back to Australia to spend time with her.

There was no reference point for me to get my head around how life might look like if Mary and Frederik went the distance. Well, there was, but I found it too scary to think about. All I had was my intuition that he, a man from a very different world, appeared sincere and that their connection was growing at a natural pace.

A year or so later Mary decided to leave for Paris. It made perfect sense. She and Frederik needed more time to be in each other’s company. With the media in Australia on high alert it was no longer feasible to meet in Sydney. Nor was it in Copenhagen. Paris was the perfect (and romantic) stepping stone.

Mary smiled sweetly, tenderly, like a mother being gentle with her child. She knew I meant it – it was my way of saying I was struggling. And I was. I truly was.

The night before Mary flew out, we organised farewell drinks at one of her favourite pubs in Woollahra – a small gathering of her closest friends. The two of us made a pact to leave together so we could say goodbye privately. I’m not going to lie, I bloody hated that party, but I did my best to put on a brave face.

The truth was I was happy she’d found love, she deserved it.

At the end of the night we made our excuses and headed off. There was a lot of hugging and well wishes, with a few friends promising to look after me (the child), while she was gone.

This comes from a chapter called Playing in the Dark, when Amber was hosting the SAFM breakfast show in Adelaide with Dave “Rabbit” Rabbetts. At the time, Amber was in a relationship with a man named Travis (not his real name) whom she met while filming Celebrity Survivor in 2006.

Over nearly six months of living there, the pool water kept mysteriously turning Kermit green – no matter what I did or how many times I called the local pool guy to blitz it with chemicals. 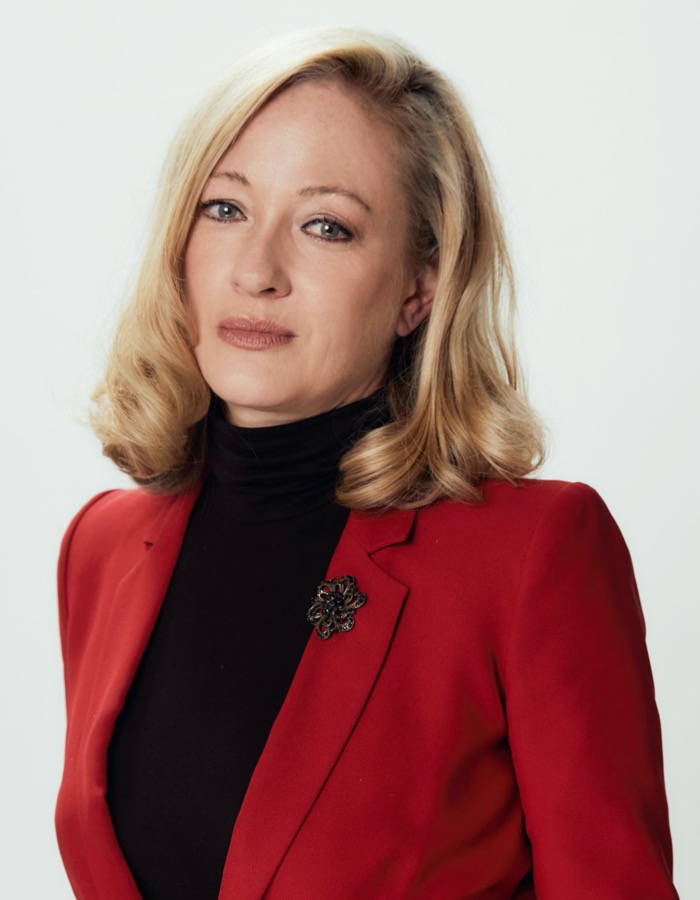 I saw photos of a young blonde on his phone which he insisted were taken between cameras rolling on a locally made TV show he was working on.

There were photos of a woman naked from the waist down, asleep on a couch, apparently sent to him by a “d**khead mate”. And still I let him stay. Even worse, I continued to share a bed with him.

I thought by trusting Travis when we came to Adelaide I had a chance to be proven wrong. I tried to convince myself that somehow I was more in control now I had a job and a house with my name on the lease. But I was kidding myself. All I was doing was enabling both of us.

Fears of humiliation buzzed like a fly around my head every single day.

Finally, after another call to the police and Travis taking off to stay “at a mate’s house”, I decided I needed help. I didn’t know what his limits were anymore.

I chose the Big Radio Boss to tell my secret to because, while he was the person I wanted to impress more than anyone, I also knew he was tough and I needed someone to be alert on my behalf. To know if something happened to me that he would be aware. He could testify. He could get justice for my family.

I made one more bad decision before calling it a day with Travis. A month after my hotel stint, in which time Travis had gone to stay with a “mate” after I made it clear I was sharing the truth about us to my boss, I allowed him back home. His tears and pleading and begging for one last try had worn me down. It wasn’t long before we were up to our old tricks.

I came home early from work one Friday to find Travis’s computer open and still on. It was sitting near the front door recharging. I couldn’t help myself. I refreshed his screen, revealing the last website he’d been on. It appeared to be a dating site – a nasty one called Red Hot Pie.

As I waded through the long list of relationship items most women wouldn’t have put up with, I chose Red Hot Pie to be most outraged about. When I confronted Travis, we ended up in a Once Were Warriors style clash. He punched me hard in the stomach with a clenched fist.

One second I was standing, feeling his spit on my face as he screamed “You f***ing crazy b*tch, stay away from my things”. The next I’m in the foetal position gasping for air, terrified it was never going to come.

Travis didn’t come for me again that day and I think I went into shock over what had happened. A functioning shock where I could still show up for work and be playful and fun – but I was a shell. I didn’t know how to process so I stayed quiet for a week or so. I didn’t even know how to tell him to get out of my house. I didn’t know who I was dealing with. I didn’t know people like him. But yet, here I was.

The months that followed felt like the calm after a terrible storm. Once I left the station for the day, I’d spend most of my time alone. In silence.

Soon the loneliness was replaced with something more urgent, more aggressive. At night I would lie in bed thrashing back and forth like an addict going cold turkey.

My anxiety was so bad I could hardly breathe. I would claw at my bed sheets and pillows, wanting to rip them apart. It was like I was trying to get outside of myself or away from myself. Away from the feeling I didn’t understand. I hated the world and I hated that I couldn’t find any joy. I couldn’t hold any sort of gratitude.

I chose to get professional help to find out if what I was feeling was depression. The thing was I knew, on my dad’s side, mental illness (and suicide) was a thing. A very real thing. It’s how he lost his mother. It’s how she lost her father. So maybe, I thought, there was a chance, this might just be my time.

I made an appointment to see a GP with the sole mission of admitting I was scared. I was dreading the appointment.

“What can I help you with today?’” the doctor asked once I’d sat down. Suddenly I felt like someone had just turned the MCG lights on in my head, like I’d look up and see a packed crowd in the grandstands staring down, waiting for my reply.

He wanted me to know he’d been going to a :healing energy centre” and suggested I look into it. “I think you’ll like it. It’s spiritual, like you.”

This side of him was what had made me fall in something with him back in Vanuatu. Reading his text, I remembered what it was about the two of us, once upon a time before hell. 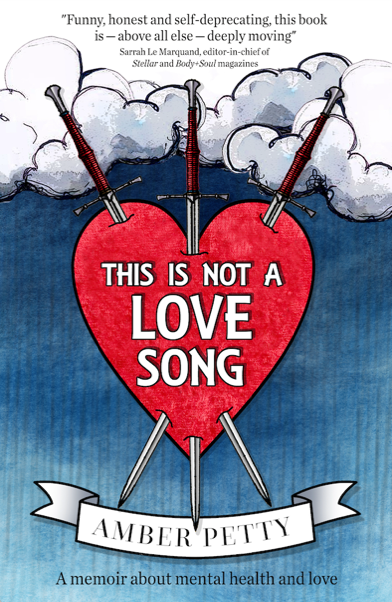 I wasn’t sure what to expect when I arrived at the healing centre. All I knew was one door had shut and I needed to open another – fast. It wasn’t a case of hoping to bide my time so I could ride through my rough patch and feel good again. I couldn’t remember when I’d genuinely felt good but if you’d asked me when I started feeling worse it began when I left Julian, shutting the door on pain and running. Back when I was 27.

It was time to take back my power. Although it would not come without a fight.

This is Not a Love Song by Amber Petty is available from Booktopia, all good bookstores and www.amberpetty.com.au.