The Agony and the Ecstasy

In 2016, high flying journalist Elle Halliwell discovered within two days of each other that she had a rare blood cancer – and then that she was pregnant with her first child. She recalls the decision of a lifetime she and her husband had to make.

By her late 20s, Elle Halliwell seemingly had it all: she was married to Nick, the love of her life, and a high-flying fashion and entertainment journalist across newspaper, radio and TV. But despite her success she felt anxious, burnt out, and suffered low self-esteem.

In 2016, Elle’s life changed forever when she was diagnosed with chronic myeloid leukemia, a rare blood cancer, then discovered she was pregnant – all within the space of 48 hours.

This time of hardship changed everything. Elle had to learn to trust the universe and herself. She needed to relinquish control and reassess her life’s values, making her decisions from a place of love, not fear.

After her beautiful baby son, Tor, was born and she had completed her treatment, Elle made a pivot
in her career. Her desire to raise awareness in the wellness space was sparked, writing her best-selling book A Mother’s Choice, and stepping into the public arena to share her story and inspire others.

Today she is at peace, grateful and aligned with her values. To top it off she has started a jewellery-for- healing business, Auricle Ear Seeds, and is also a naturopath in training.

Elle, now 35, recently shared her incredible story with me for a Powerful Steps’ Powerful Stories podcast (more about these podcasts over the page). Here are some powerful highlights of her journey.

ELLE HALLIWELL IN HER OWN WORDS

In hindsight I feel I built up my earlier career more on one part of me – the Ego Elle. When we’re really young, just starting out in our careers, often that’s the driving force. It’s things like making sure that what we do is going to be seen by other people as really cool or looks good in their eyes. Probably that drove a lot of my decisions when I was younger.

Who I am now is very much more focused around spirit. It’s a bit of a challenge that we all have to overcome: ego versus spirit, to realise they are different things.

Sometimes it takes a health crisis or tragedy in
your life, or some sort of adversity, to realise the difference. And that’s what happened to me in 2016.

I got my foot in the door as an editorial assistant
at The Sunday Telegraph [in Sydney] when I was around 20 and worked my butt off. I was ambitious as a young person and very much of the mindset that if you keep it in your mind and you believe it, you can achieve it.

Eventually I got a role as a cadet journalist. I really wanted to get into fashion and celebrity style so I started to pitch and write stories relating to those areas.

About six months into my cadetship, I was called into the deputy editor’s office and told that the current style editor was leaving. Would I mind filling in for her until they found a replacement? All I could do was kind of nod my head and tiptoe out hoping she wasn’t going to change her mind before I left the office!

I knew that this was my opportunity to really prove myself so they wouldn’t want to find anyone else! So, at the age of 21, I became the Style Editor of The Sunday Telegraph. I also started dipping my toes into showbiz and entertainment, then health and beauty a bit later on.

By the time I was in my late 20s I was doing a national radio show on Nova on Sunday nights and a showbiz segment on Sunday mornings for Nine’s Today Show while in a full-time role at The Daily Telegraph [also in Sydney]. I was burning the candle at both ends, every single angle that you could imagine.

I’d just turned 30 and my health was not a priority. I put my work on top of every other area of my life. I missed out on so many social events and family moments because I was constantly putting work first.

Sometimes I think you’ve got to be careful what you wish for, because at this point I had everything that I “wanted” and had dreamed about. Yet at the same time I was crippled with anxiety and self-doubt. 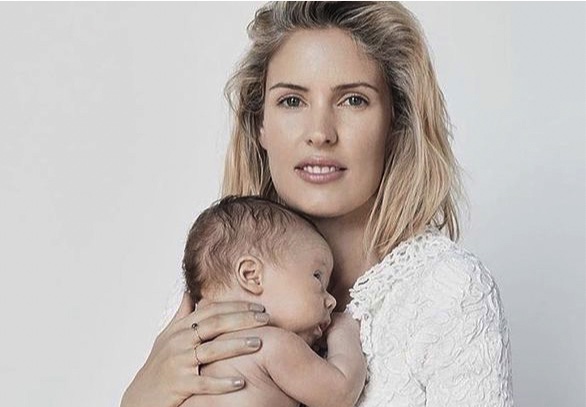 It wasn’t to do with the kind of people I would interview. Sure, I’d feel a bit nervous ahead of some of the interviews I did but when I sat down opposite a big celebrity – be it The Rock, Kim Kardashian or Angelina Jolie – they were just normal people.

It was more of a worthiness thing, like why do I deserve to be in this position?

So I’d just turned 30, and things were going great in my love life. I had a beautiful husband, and work was manageable. But I was stressed to the limit, crippled with anxiety, and not sleeping well. My health was not a priority. I put my work on top of every other area of my life. I missed out on so many social events and family moments because I was constantly putting work first.

Then I decided that, being 30, it was time to start thinking about a family. I went to the doctor to get my folate and vitamin D tested because
I thought maybe at the end of that year, I would start trying.

That’s when I got results that I had too-high platelets. I didn’t really know what that was, and Fashion Week was coming up, the busiest time of the year for me. So I just put it to the side as the doctor said: “Get another test. It could be the result of a virus that you had a week prior to coming to us.”

Two weeks later I went to my GP to get the new test results, and my platelets were even higher. That was on a Thursday and I was to see the hematologist the following Monday. In between those two appointments – within two days of my diagnosis – I found that I was pregnant with my first child. 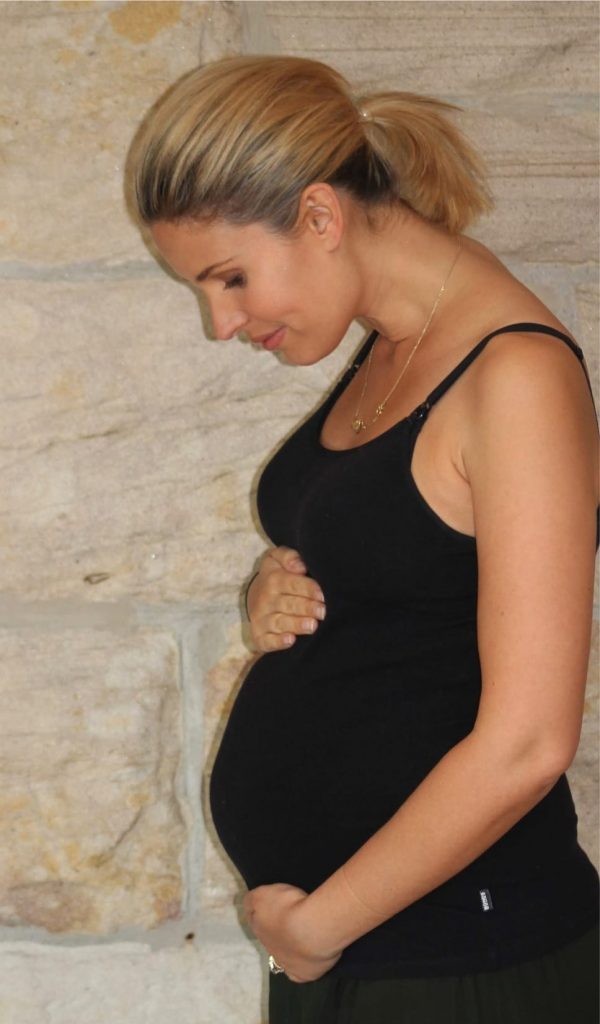 To say I was in shock is a massive understatement. A couple of weeks before the diagnosis I’d planned to go out with friends for dinner. Because I’d gone off the pill and wasn’t being that careful, I thought I’d take a test just to make sure I wasn’t pregnant so I could have a few drinks. It was negative.

Then after my diagnosis I thought to myself,

“What, if anything, could make this situation worse?’ All of a sudden it popped into my head, “Take another pregnancy test”. It was positive. I must’ve been in the very early stages when I took that first test. It was really, really difficult telling my loved ones that I had this rare form of blood cancer. But we didn’t tell anyone at this point that I was also expecting. My thinking was: “This is not going to end well’.

That was reiterated to me when I saw the haematologist and he said: “I strongly advise you to terminate the pregnancy” because he wanted me to start on this revolutionary, relatively new drug for people with my illness.

I honestly do not think I would have gotten through it without Nick. I’m very much of a respect authority kind of person. If the doctor says, “Take this, do this, do that” I’ll say, “Okay, absolutely, yes sir.” Whereas my husband, God love him, is a bit of a rebel. He’s very street smart.

He was the one who said, “Whoa, whoa, whoa. Hang on. Okay, thanks for your opinion doc, but we’re going to process this and we’ll get back to you.” That’s when I thought, “Oh my gosh, yes, of course.”

So we went home to process it. All my life, especially as a journalist, if I’ve needed to know something, I would research it. But I couldn’t bring myself to know more about this illness. It was actually my husband who started to do research and found someone who had a specialist centre in the UK, who had delivered a baby for a patient with CML.

We consulted a CML expert in Adelaide and after a lot of tears and sleepless nights, I decided that I was going to delay my treatment and keep this child. 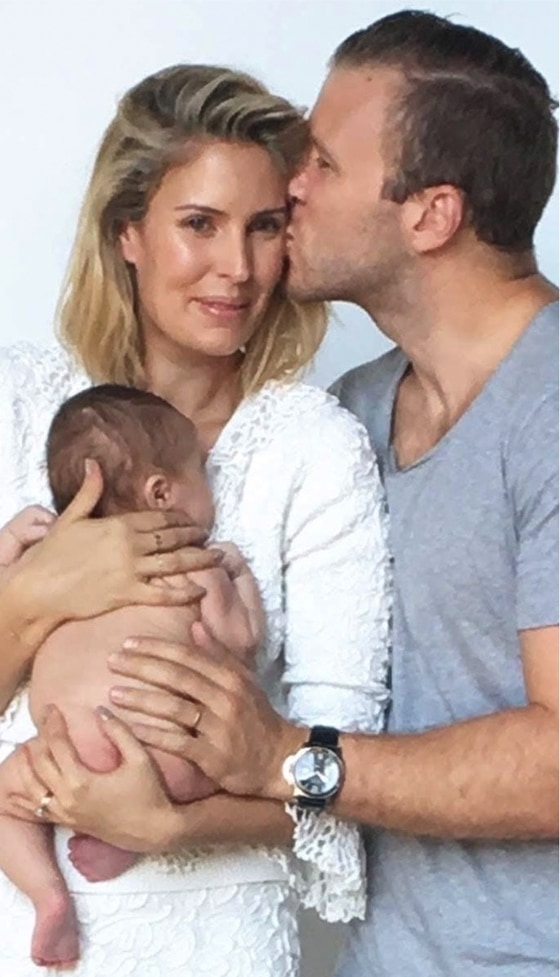 I think that sometimes when we relinquish that desire to control, things just start falling into place because we’ve surrendered to the universe a little bit more. When you do that, things just kind of flow effortlessly. If you’re constantly trying to make things happen and control every single element, it’s like you’re trying to create a dam with your arms in a massive river.

When you just go, “What’s going to be is going to be, I’m going to just use my intuition to guide me to the right things that’s when we start seeing. Coincidences and synchronicities start to appear. That’s when we know that we’re in the flow and things are going the way that they’re supposed to be.

After I returned to the Telegraph from maternity leave, my work seemed like it hadn’t changed but I’d changed so much. I decided to leave, not really knowing what the plan was. I just knew in my heart that I needed to do this.

Eventually I wrote a book, and started doing inspirational, motivational speaking for groups and organisations, and working with various charities, including the Leukaemia Foundation and the Cancer Council.

I guess my mission is to spread the message that you don’t have to be permanently stressed in order to feel like you’re succeeding. You know what I mean? Find work that really lifts your soul up. 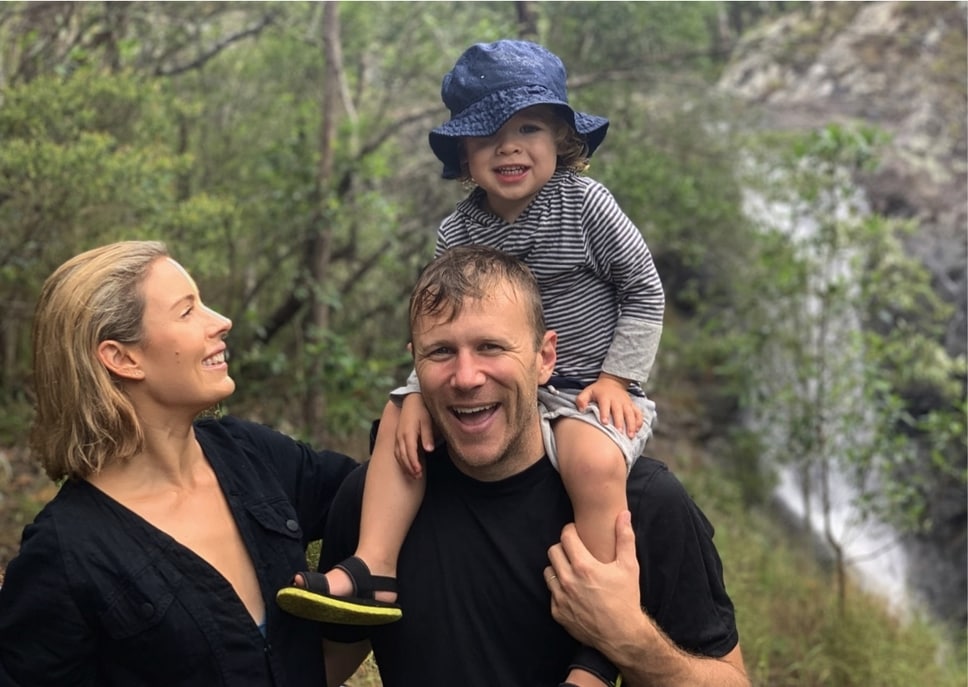 Now my life is very peaceful. It’s much slower. I’m graduating this month as a naturopath. I’ve also started a wellness company called Auricle Ear Seeds, which are 24 carat gold-plated acupressure seeds. You apply them to your ears at home and they have similar effects to acupuncture. They’re great for anxiety and stress, back pain, period pain, insomnia … the list of things they can help with is endless, I’ve personally found. So far, the response has been amazing. People have really resonated with it. I’m thrilled!