We take it for granted – the automatic reflex and life force of breathing. But if we are more mindful about the way we breathe it will boost both physical and mental health.

Raise your hand if one or more of these traits is tipping you off your game and making you feel unhinged. Getting back to balance doesn’t have to involve huge upheaval. You are the guardian of your own control button. How you play it, at what volume, which channel, switched on or off is supremely your choice. Yep, change is in the air. Freeing up headspace, releasing tension and aiming for harmony are literally a breath away.

Regain control at any given time with a few simple breathing guidelines. Think of your body as your home and your breath as your favourite guest, like your bestie.

Changing your state of mind involves your willingness to open your home to the said bestie.

Here’s why I consider your breath your ultimate BBF.

Right from day one up until this moment your breath has never left your side. It held your hand through every first and new beginning. Remember that first day of school after you got dropped off. Yikes, deep breaths lassoed courage to the rescue! That new job or that first date. Your bestie got you through it. It has loved you no matter how low or high you’ve soared. And even when you forget it, it’s still there to pick you up. Whether you acknowledge it or not, your constant companion will keep you alive. 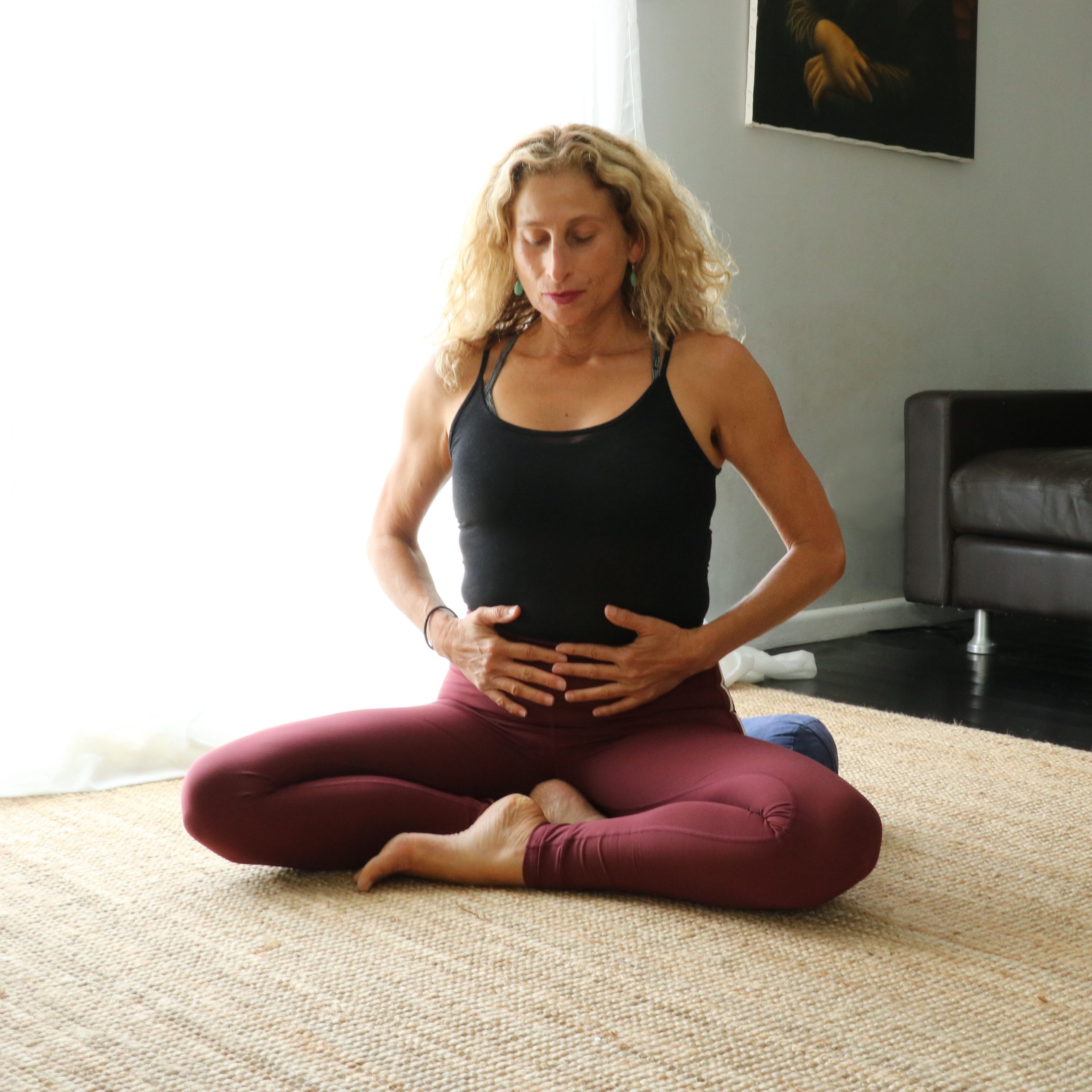 Be a good host and let them in … literally!  Inhale. Nice and slowly.

Slow breathing has been associated with improved psychological and behavioural outcomes.  For example, several studies from a recent review titled How Breath Control Can Change Your Life observed that during and after slow breathing there was a noted reduction in anxiety, improvements with depression, reduced anger, and increased relaxation.

With controlled focused awareness that next breath of yours is the magical key to shifting your brain waves to an alpha state (deeply relaxed while awake) and improving your heart rate variability (HRV). If you are operating according to any of those abovementioned states (fight-or-flight mode), the variation between subsequent heartbeats is low.

When in a more relaxed state, the variation between beats is high. In other words, the healthier HRV the faster you are able to switch gears, showing more resilience and flexibility. Think of it this way, the inhale promotes a faster heartbeat and the exhalations a slower heartbeat, inducing a more relaxed state. We want to be supported through all our choices and a balance between the two beats is utopia.

The key here is to be completely alert and aware of what you are doing at any given time. With said key in hand let’s proceed.

How to breathe … statistics show that tens of millions of people globally suffer with the profound and misunderstood symptoms and deficits of learned dysfunctional breathing habits. It has been estimated [that breathing habits] account for roughly 60 percent of emergency ambulance calls in major US city hospitals. (Fried, Robert Breathe Well, Be Well. 1999, p 45).

Unfortunately, poor breathing goes unaccounted, for both the patient and the practitioner for its potentially profound debilitating effects.

Small solution: It’s on your face! Nostril breathing is a must! Relax your jaw, close your mouth and let your breath exclusively flow through your nostrils. Nasal breathing is swift, efficient and hygienic.

I am not going to mess with words here, the fact is the nose is for breathing and the mouth for eating. Okay, talking too, but try to keep your gob shut while you listen.

Why am I being sergeant major about this? Because your nose is an efficient filtering machine that can humidify, moisten and sift polluted air before it gets to your vital organs.

The World Health Organisation (WHO) reported that our polluted air is effecting 95 percent of people detrimentally, resulting in six million deaths annually. Our air is littered with a plethora of chemicals, bacteria and viruses, to name a few.

Your breath wants to provide you with the highest quality oxygen that is going to serve you well. Mouth breathing on the other hand is like opening your front door to any Tom, Dick or Harry. No filter, cold air that is drier, carrying all matters of bacteria. Mouth breathing is about as natural as eating through your nose.

I am assuming you’re still breathing!

Your inhaled air has to reach into the lower part of your lungs. Wrap your hands around your belly to monitor your breath moving in the abdomen. Breathing low into your lungs means you activate your diaphragm.

Optimal breathing is considered to be diaphragmatic breathing and not necessarily with large and powerful breaths. When the air reaches down into the lower lobes of your lungs the gas exchange is efficient. Shallow breathing which is often linked with one of those traits I listed earlier on, is where the inhaled air only reaches the upper parts of the lungs which can inhibit gas exchange causing air to be trapped and become stagnant.

This is known as “dead space” and is air that does not reach the alveoli or air that enters poorly and is not fully absorbed in the alveoli. Breathing harder and deeper has no effect on saturation at all. It’s all about engaging the diaphragm and breathing slowly. Studies have shown that breathing slowly and reducing your intake to six breaths per min was found to be optimal for improving alveolar ventilation and reducing dead space.

Optimal respiration requires active control of the diaphragm, such that during inspiration, the lower ribs stay low and only expand laterally, while the abdomen expands instead of the chest. As the diaphragm contracts and expands downwards and outwards on inhalation, it lowers the pressure in the chest and effectively massages our vital organs.

Shallow breathing is excessive chest breathing that can render the diaphragm sluggish. Consider your breathing to be like a rhythm you live by that is going to support you through all your choices. If today you seek to be calm, then choose to breath slow and low feeling the movement rhythmically flowing from your abdomen.

Listen for a smooth flow of air that will enable you to be alert, focused and relaxed. Aim for a slow release of air that feels longer in duration to the inhale. Your exhalation wants you to relax.

Posture is key to optimal breathing. Sit up! The ancient author of the yoga sutras, Patanjali says that a pose needs to have the dual qualities of firmness and lightness. Sitting upright either on the floor or in a chair is ideal for maintaining an upright spine, keeping the diaphragm and lungs unobstructed. Lift your chest high and softly roll your shoulders back for a relaxed hold. The aim with an upright position is to support a diaphragmatic breathing. (photos will be provided to support different sitting postures)

All you need to know:

When to do it:  Now. Anytime. Anywhere. Now.

Adriana Cortazzo is an intuitive yogi and mother of three, plus a dog named Chase. “A plant lover and professional daydreamer. I’m a flexible thinker, a creative yogi and a devotee to daily doses of beach swims, forest foraging and breathing. What got me started in yoga … When I was 19 I was involved in a serious car accident that could have injured me and killed my passenger. But it didn’t because on that day I heard a very distinct, loud voice tell me to instruct my passenger to immediately put her seat belt on. That voice saved our lives and we came out of the car completely unscathed. I kept repeating “thank God that person told us to put your seat belt on”. She looked perplexed. She didn’t hear any other voice but mine.Tthat internal voice guided me to my first yoga class. I had never once heard of the word yoga or knew anything about it but it was love at first sight. That was over 35 years ago and yoga has been with me every day since. Yoga is a beautiful system of facilitating higher states of being. Layer by layer it patiently seeks to explore our soul potential.”