These are the words of Samantha Bloom, about the spinal cord injury that transformed hers and her family’s lives. Also, a cause to which she and husband Cameron have dedicated themselves, to raising awareness and funds for the past few years.

From age six, Sam dreamed of being a nurse explorer, visiting isolated villages and far-off lands, helping people. “And falling in love one day and, if I was lucky, having a family of my own.”

Samantha achieved her childhood dreams. She travelled extensively, mainly through Africa as a nurse, met her great love and soulmate, Cameron, a highly talented and respected photographer, and is a happily married mother of three boys.

The blink of an eye, a heartbeat, a split second in time … that’s all it took for life to change forever

Born and raised on Sydney’s Northern Beaches, where she now raises her own family, Sam also revelled in an active lifestyle, running, swimming, biking and surfing every chance she had.

The moment it all changed

In 2013, life took a devastating turn on a dime. The family was on holiday in Thailand, enjoying the view from the rooftop deck of their hotel, when Sam leaned against a railing.

It collapsed, and she fell two storeys and six metres. The accident paralysed her from the chest down, her spine shattered at the T6 and T7 vertebrae just beneath her shoulder blades.

Sam also fractured her skull in several places, ruptured both her lungs, and her brain was bruised and bleeding.

“The blink of an eye, a heartbeat, a split second in time … that’s all it took for life to change forever,” as she powerfully puts it.

“Once incredibly active and fiercely independent, I was now confined to a wheelchair and completely reliant on help from others for every little thing.” She was, however, still able to move her arms, which was to become a godsend.

Life turned on its axis

When her condition was stable enough, Sam returned from Thailand a month later and spent seven months in hospital and rehab.

She was told her spinal cord was irreparably damaged; that she would never again walk, stand or sit up unaided.

Her injuries had also robbed her of her senses of taste and smell and she suffered from acute neuropathic pain caused by abnormal communication between damaged nerves and the brain.

When finally able to come home, Sam fell into a deep and consuming depression, as well as a state of anger.

“We live at the beach and it just rubbed it in even more,” she recalls. “I would be sitting staring at people surf. It would make me so sad. 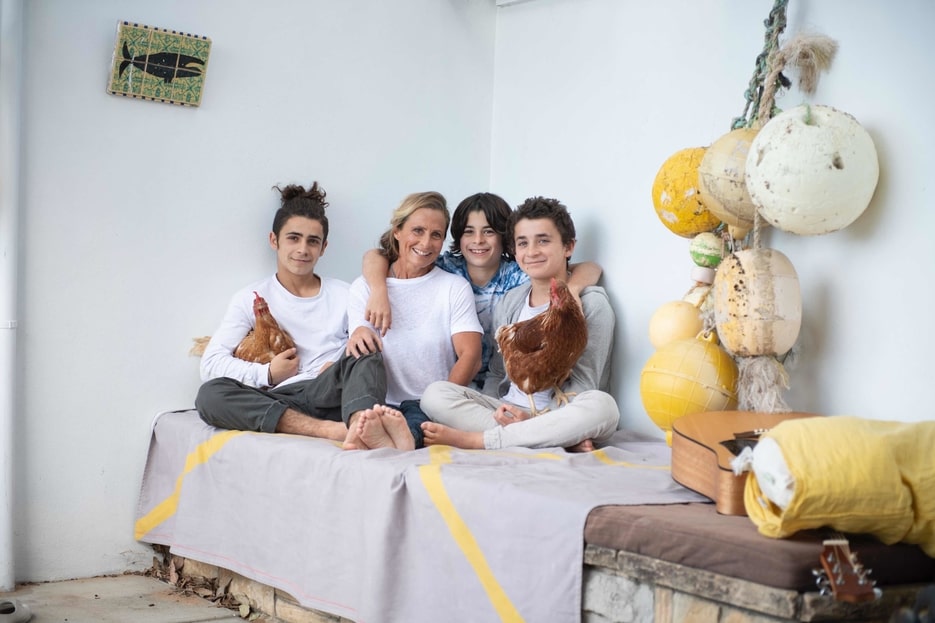 “I found it hard to get out of bed because I had nothing to do. It was like I was on house arrest.”

The physical impact was utterly catastrophic but as Sam and Cameron tell Thrive, the psychological and emotional fallout was just as devastating.

Possibly the greatest challenge was the effect she felt she was having on her family – Cameron, and their three sons, Rueben, Noah and Oliver.

“I felt like the worst mum in the world because I wasn’t the same mum. I wasn’t energetic and happy.  I was angry and I felt so guilty that I wrecked their lives and their childhood.” 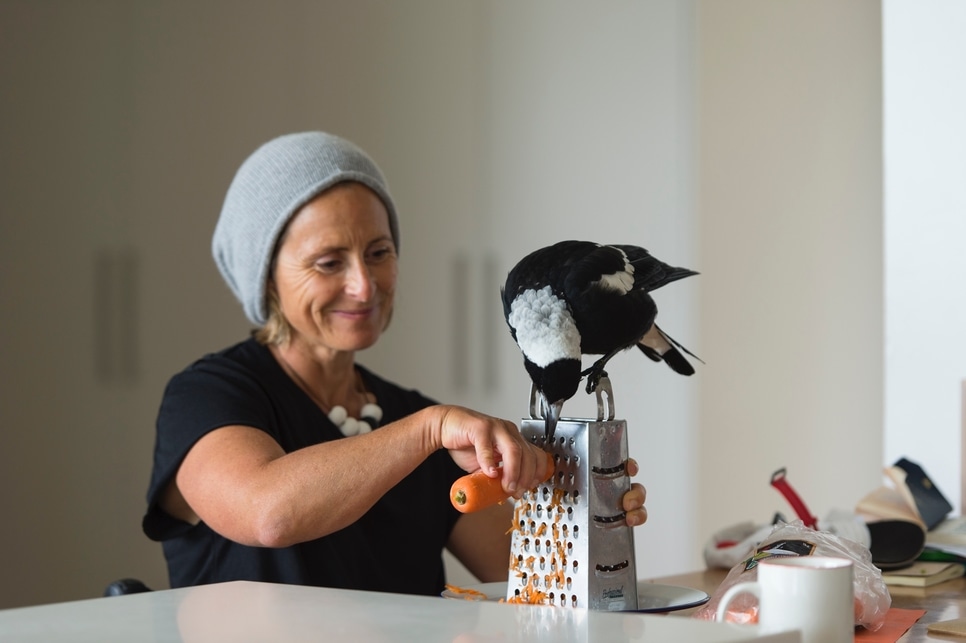 The chick was found by Noah at his grandmother’s place three months after Sam returned home from rehab.

The baby bird had a damaged wing after falling out of her nest and the Blooms were worried she’d die if they left her there alone. So she became a member of the family.

They called her Penguin because she was black and white, and her walk was more like a waddle.

“We became inseparable and over time Penguin slowly brought life and laughter back into the house where sadness and sorrow had reigned,” says Sam.

“We didn’t realise she’d stay with us for quite so long. In a selfish way for me, caring for Penguin gave me the confidence that I actually was capable of looking after something, which I didn’t think I was.”

“I spoke to her about how much I hated this, with what had happened,” she says. “I felt bad for Cam because he had so much to deal with; obviously with me and looking after the kids and work too.

“So I didn’t want to constantly complain to him. I would just complain to Penguin instead.”

As she writes in her memoir, Sam Bloom: Heartache & Birdsong, released last year, Sam was so depressed that she was contemplating suicide. But caring for Penguin was the newfound purpose she needed: “I thought I was saving her life, but she was saving mine.”

The boys loved their new sibling, too. However, Penguin was never a pet. She was free to come and go as she pleased, to be the wild bird she is.

As Penguin grew older and stronger, she would start spending more and more time away from the Blooms’ home.

One of Sam’s favourite memories is from her eldest son, Rueben’s 13th birthday. At the time, they hadn’t seen Penguin for about six weeks and were worried something had happened to her.

“We went to my mum’s for lunch and Cam got a phone call from a local lady saying, ‘I think Penguin is inside my house’.

“Cam drove over and it was Penguin. He picked her up and brought her back to our place. It was the coolest surprise.”

The family has adopted a series of injured or abandoned birds over the past seven years.

Being a professional photographer, Cam started capturing Penguin’s candid moments with the family.

From Penguin snuggling with the boys in bed to pecking Sam on the lips, and casually sitting on everyone’s heads, he caught simple but extraordinary moments and shared them to an Instagram page. It quickly went viral. This led to the bestselling 2016 book, published in 13 languages.

“The moment they rescued the bird, [Sam] started to heal emotionally and become a more functional person again,” says Bradley Trevor Greive, the US-based Australian author – best known for his global mega-seller, The Blue Day Book – who collaborated on both Penguin Bloom and Sam’s memoir. 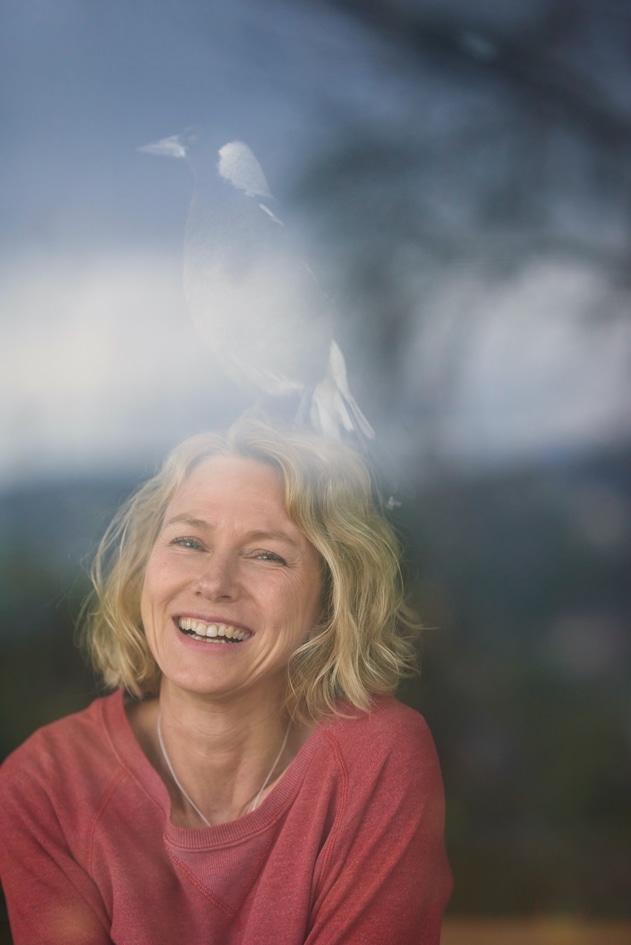 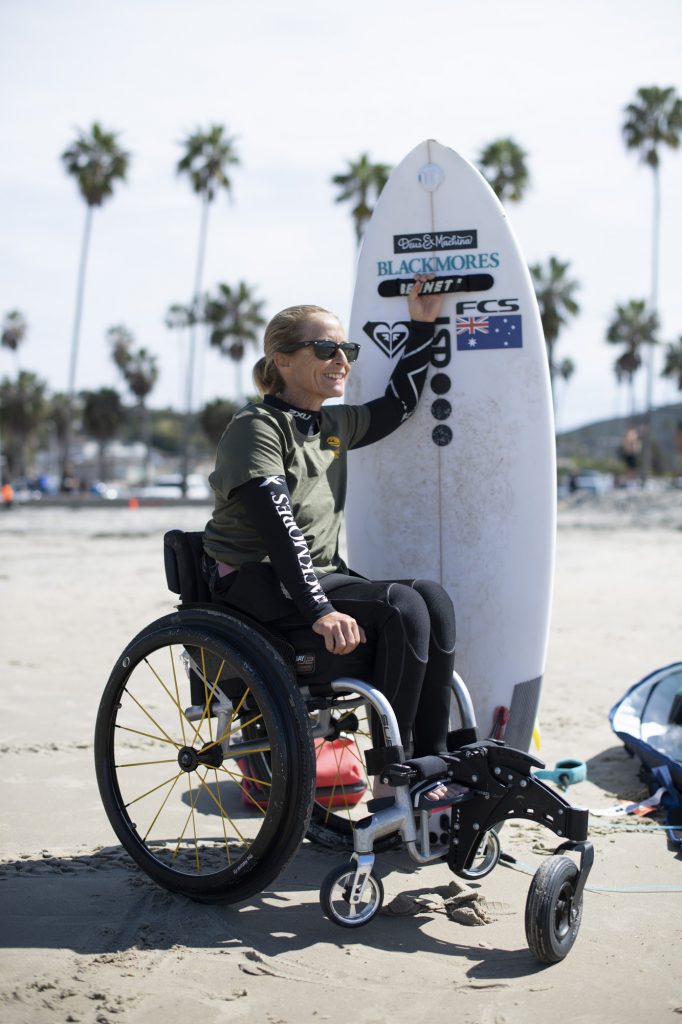 From this, Sam found a renewed sense of purpose and strength in taking up competitive para-canoeing, eventually placing 13th in the world and winning two Australian titles before representing her country at the 2015 World Championships in Italy.

“Sam always felt that Penguin had a remarkable sense of timing and around the same time that Sam left for Italy, Penguin returned to the wild for good.”

Today, Sam has reconnected with her love for the ocean and made a return to surfing.

“Cam has been incredible from the moment it happened. He has had to put up with a lot from me but has never wavered in his support, compassion or positivity. It blows my mind actually,” Sam says.

In 2017, Nola Wilson, the mother of champion surfer Julian Wilson, sent Sam a package with a beautiful letter and handmade cowrie shell jewellery.

She also encouraged Sam to take up surfing again – a sport Sam has loved since childhood.

“Nola played a huge role in getting me out into the ocean and back on a surfboard,” Sam says. “I think she understood how beneficial the ocean could be for me, not just physically but from a mental health perspective too.

“Every time Cam takes me out, I feel so much better and we always have fun. Getting back on a board has played a massive role in making me feel a bit like my old self again. I love being in the water, it brings a sense of freedom.” 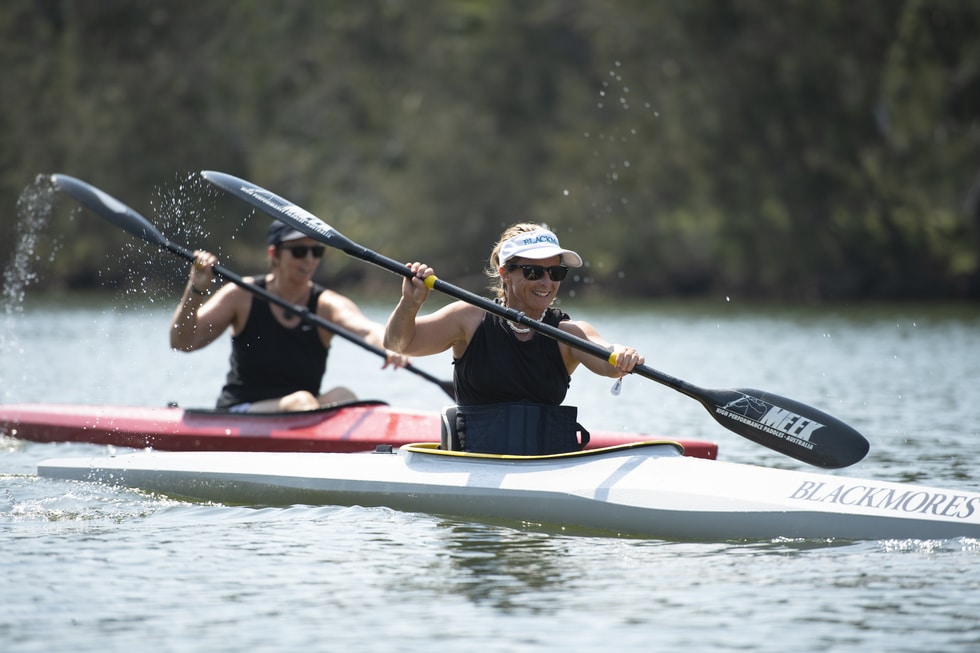 But in true form, Sam took it to the next level: in August 2018, she was selected as a member of the Australian Adaptive Surf Team and has since won Gold for Australia at both the 2018 and 2020 World Para Surfing Championships.

Her efforts were supported by Blackmores, the iconic Australian health supplements company founded in Brisbane in the 1930s by naturopath Maurice Blackmore.

Cam has had to put up with a lot from me but has never wavered in his support, compassion or positivity. It blows my mind.

“Marcus [Blackmore, son of Maurice and the company’s biggest shareholder] and the whole team have been an unbelievable support to me,”

Sam says. “They have been behind us all the way.”

She has also been taking their supplements for some years. A doctor told her after her injury that she had “the bones of a 75-year-old”. Sam believes that after taking supplements, her next check showed that her bones were normal for her age.

Her next challenge was to get back into surfing and she has since won two World Para Surfing Championships, in 2018 and 2020 – these achievements also heavily supported by Blackmores (see video).

But arguably Sam’s and Cam’s greatest achievement has been to raise awareness and funds for spinal cord injury causes, notably www.spinalcure.org.au and www.wingsforlife.com.

PrevPreviousThe Face of Lockdown
NextFOOD is not the ENEMYNext
On Key